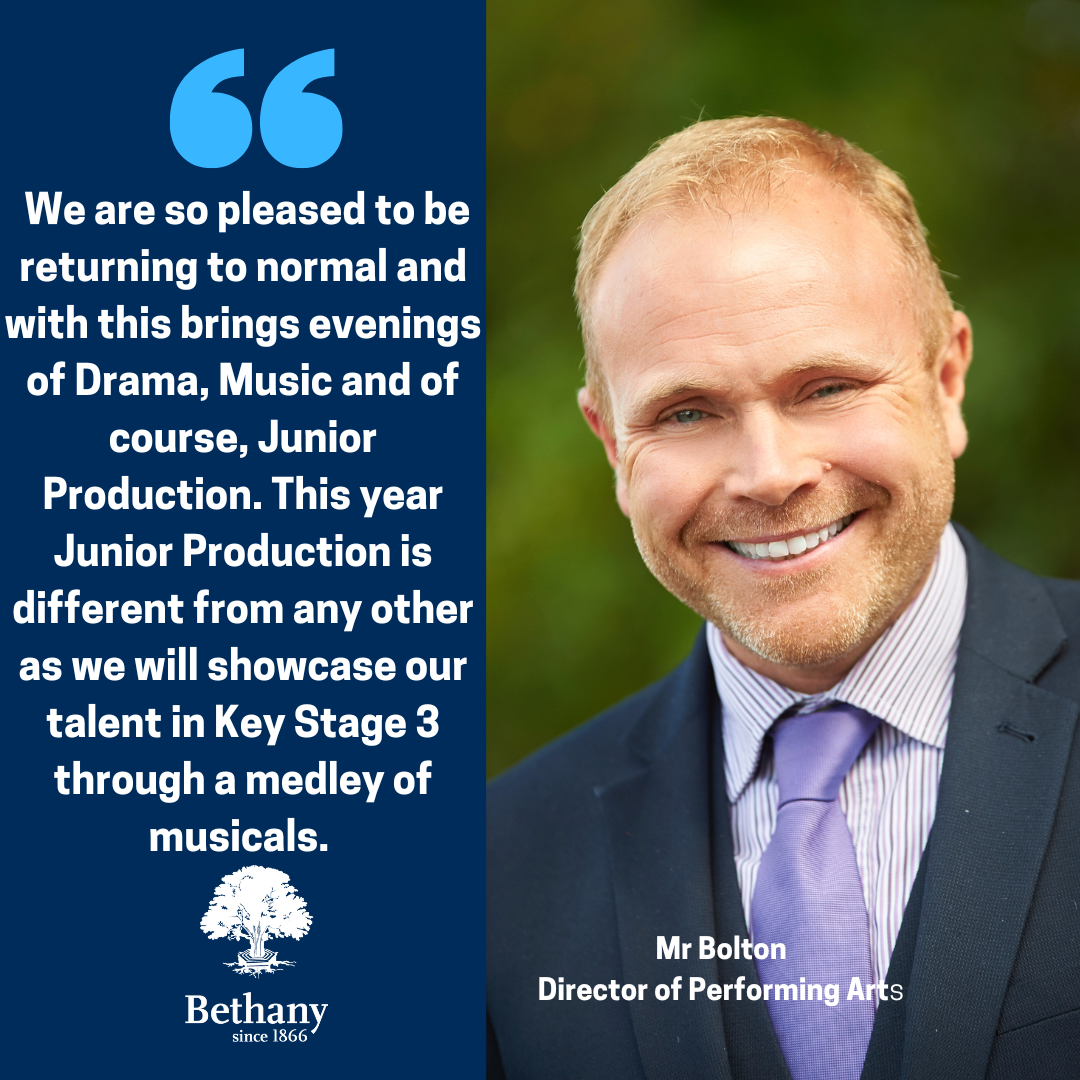 We are so pleased to be returning to normal and with this brings evenings of Drama, Music and of course Junior Production. This year Junior Production is different from any other as Key Stage 3 talent is showcased through a medley of musicals. Our pupils have learnt dances under the direction of Rachael Payne, songs with Miss Bullock and acting moments from some of our favourite productions in the West End. All of this was produced by our Assistant Director of Performing Arts, Sam Baker. What a fantastic job she has done.

Junior Production is a crucial part of our Performing Arts Provision as it provides our younger pupils with further experience in theatre production and enables them to take centre stage.

We are so proud of their achievements and they have learnt so much, at such pace after “Grease” was delayed to enable a live audience to return to Bethany. Our usual five month rehearsal window was curtailed somewhat to a two month opportunity to bring our young performers to this evening. They have certainly risen to the challenge.

Have you ever considered what it would be like to be totally responsible for holding an audience’s attention? Have you ever experienced being the only person talking in a crowded room? Do those possibilities fill you with fear? Bethany School’s Year 10 Drama pupils proved that they could engage an audience, tell a story and become a character…on their own! Monologues are written to provide the audience with some time with one character and for even the most experienced performer this can be challenging.  Sixteen GCSE Drama pupils performed their monologues to an audience of parents and staff on Monday night. Each actor prepared a monologue from plays which include “Girls Like That”, “Look Back In Anger” and “Shakers”. The performance was recorded as part of their GCSE coursework and worth 20% of the examination. This was the first time some of the pupils had ever performed in front of an audience and the results were simply stunning. We are so proud of our GCSE pupils and look forward to their practical performances in Year 11.

Year 12 were in final rehearsals this term for their adaptation of Steven Berkoff’s “Metamorphosis”. The play, based on the novel by Franz Kafka, tells the story of a regular sales person who awakes to find themselves transformed into a gigantic insect. The production demonstrates, use of space, physical theatre and exaggeration.

Year 12 will begin rehearsals for their next unit with a play called “Gas Station Angel”. The story takes place in Wales surrounding the mysterious disappearance of Bri. The play will incorporate the acting styles of Frantic Assembly and will be performed on the 16th November to the public.

Eleven LAMDA pupils took their examinations in May and we are delighted to announce 100% achieved a Merit or above and 63% achieved a Distinction. LAMDA continues to be a popular provision for our young actors and most notably we congratulate James Caney, Laura McGee and Jake Taylor for obtaining their silver award at Distinction level.

I am sure many of us recall examinations being completed in silence but this is not the case in Music! The Music School was transformed into a live music venue and 16 pupils performed solo acts and as an ensemble to complete part of the BTEC Music examination. The evening was well attended by pupils, staff and parents who enjoyed renditions of REM and Jet to name but two. The standard of music was superb and we look forward to seeing these pupils perform again in Year 11.

The Performing Arts department are now in pre-production for whole school production for “School of Rock”. Scheduled on 1st, 2nd and 3rd February 2023, the show promises to be the biggest and best yet. The search for Dewey Finn, the wannabe rock star teacher, and Miss Mullins, the uptight Headteacher, begins…auditions will take place in the Drama Studio in September.

Supporting all pupils to be successful in English

End of examination celebration for Year 11