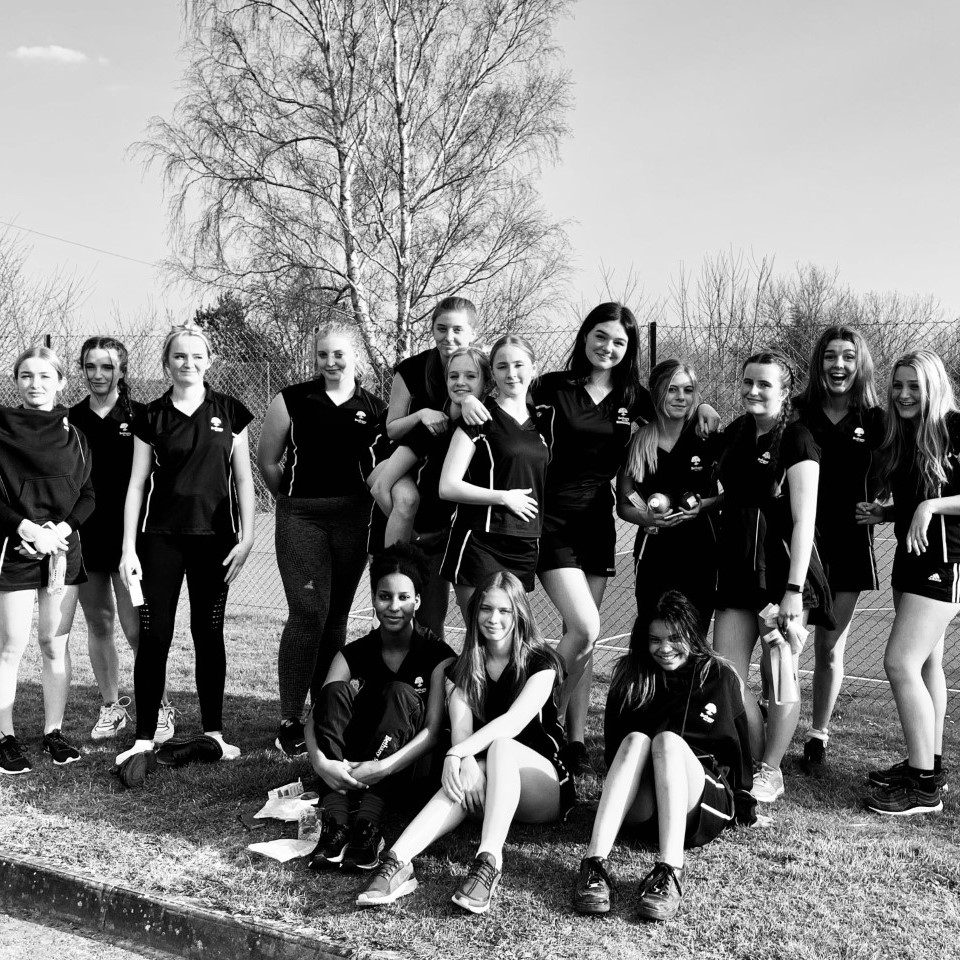 A busy week for the Bethany School sports teams which saw some close calls and in some cases, final games of the season.

On Tuesday, Bethany were up against a very strong  Wye U14`s. The game started with some confident football by the away team, but the home team's defence kept the visitors at bay. Bethany, in trying to push for a goal, were given a good opportunity on the break when George Vincent's shot struck the underside of the crossbar before he confidently tucked away the resulting rebound. Wye kept up their pressure on goal and were rewarded with an equaliser just before half time. In the second half the away team piled on the pressure, but Bethany's goalie Harrison Strange pulled off a string of amazing saves to keep the score at 1-1. Deep into the second half the visitors had a great chance with an open goal, and only had to tap it in, but debutant Billy Morton threw himself across the goal and stopped it from crossing the line. The match finished 1-1.

A beautiful day for our last fixture of the year and the girls were in play mode! Good to see some smiles and laughter from everyone. The first quarter saw a switch in defence and shooters, with Twinkle Tappenden as Goal Shooter and Anna Kiddell as Goal Keeper, both of whom did excellent jobs. Elsa Taylor and Kate Schlimper linked up well in the centre court, Gwyn Rabbetts and Emma Kuhepa hassled the attack causing unforced errors. Everyone switched back at half time and Anna Kiddell scored some crucial goals to increase our lead. Despite injuring her finger in the first quarter Ella Smith regrouped and came back on for the last half showing grit and determination.

Dover visited our Under 15 squads today for their final fixture of the season. It was a glorious day and we discussed our main aim of the match, which was to work hard and also have fun. I was pleased to see that both of these targets were put into practice. Bethany took a 5 goal lead in the first quarter thanks to the shooting efforts of Lucy Shaw and Holly McClure. At half time we challenged ourselves to mark more tightly and try and pick off some interceptions through the mid court. This was executed wonderfully and flying interceptions were coming from everyone. Dover challenged until the end but Bethany held them off and took home the victory for the day. Well done girls, you have been a pleasure to coach this season and you should be proud of your development throughout the year.

U13 A V Kings Rochester (away)

Our Under 13 Squads made the journey to Kings Rochester Sports Centre this afternoon for their final fixture of the season. The A team had the privilege of playing on the first team court indoors and it was clear that some felt a little overwhelmed going into this new setting. These fears soon went away as soon as the game was underway. Bethany converted 5 goals in the first quarter to Kings's 1 and at quarter time the team were confident enough to start thinking about strategies to improve their performance. The same themes have been resurfacing throughout the season, spacing out, driving forward and accurate passing were still the order of the day. As we have done all season, we made multiple changes, utilising all players in this very promising young squad and again the squad walked away with a convincing victory. I have thoroughly enjoyed working with this dedicated, talented and enthusiastic group of athletes and wish them every success as they move through the school. 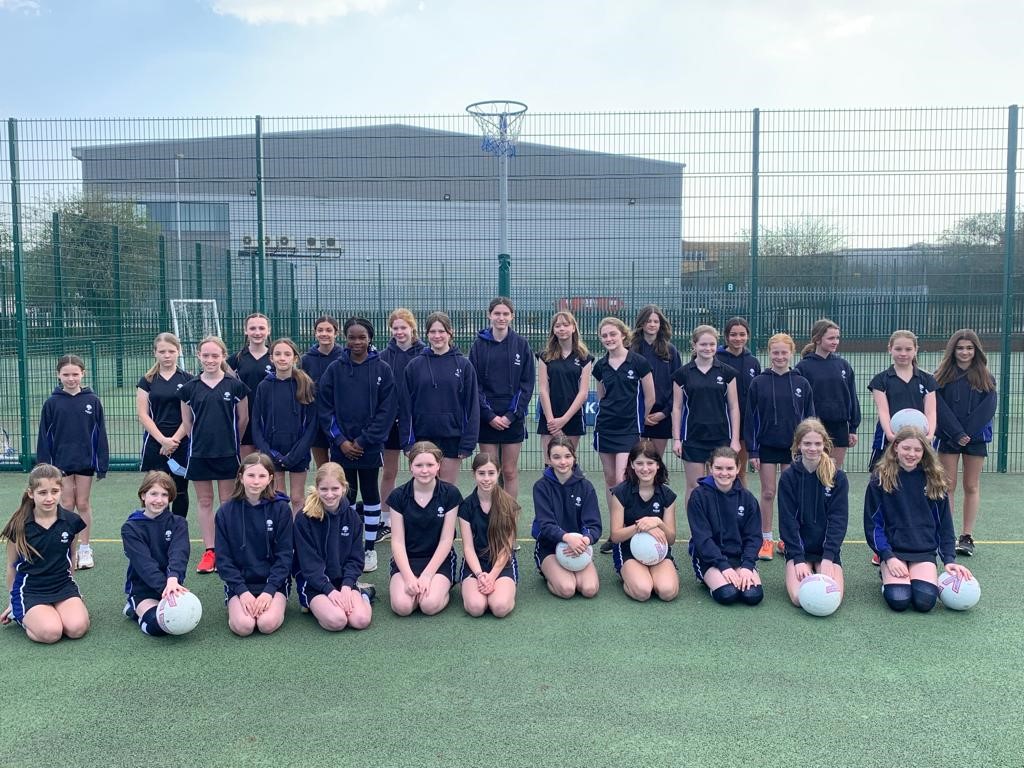 U13 B V Kings Rochester (away)

The last game of the season and all 9 girls available and enthusiastic as always. A slow start for the shooters with only 3 goals going in, but the mid court and defence ensured that the opposition only scored 1 in the first quarter. A change to the both circles to mix things up a bit saw a vast change of pace and accuracy and we stormed ahead to 9-3. Sophie Finnamore swapped to attack with a strong performance from Rose Pettit and Indigo Busk-Cowley and Leah Carnegie got her eye in for the last 10 mins.

An unbeaten season for the U13 B’s. 👏🏻 (if we don’t include the half game 6-7 loss to Dover when the teams were switched round due to mis-match)

U13 C V Kings Rochester (away)

The U13C team played King’s Rochester in a very enjoyable final game of the season. Summer Stewart-Welch and Lily Willliams shot very well with Lily Marshall working exceptionally hard in mid-court. By half time Bethany lead 9-1. Therefore we had a switch around which allowed players to try different positions. All the girls have made great progress with 14 players playing throughout the season for the U13C’s it shows the depth and ability of our fantastic Year 7 & 8’s 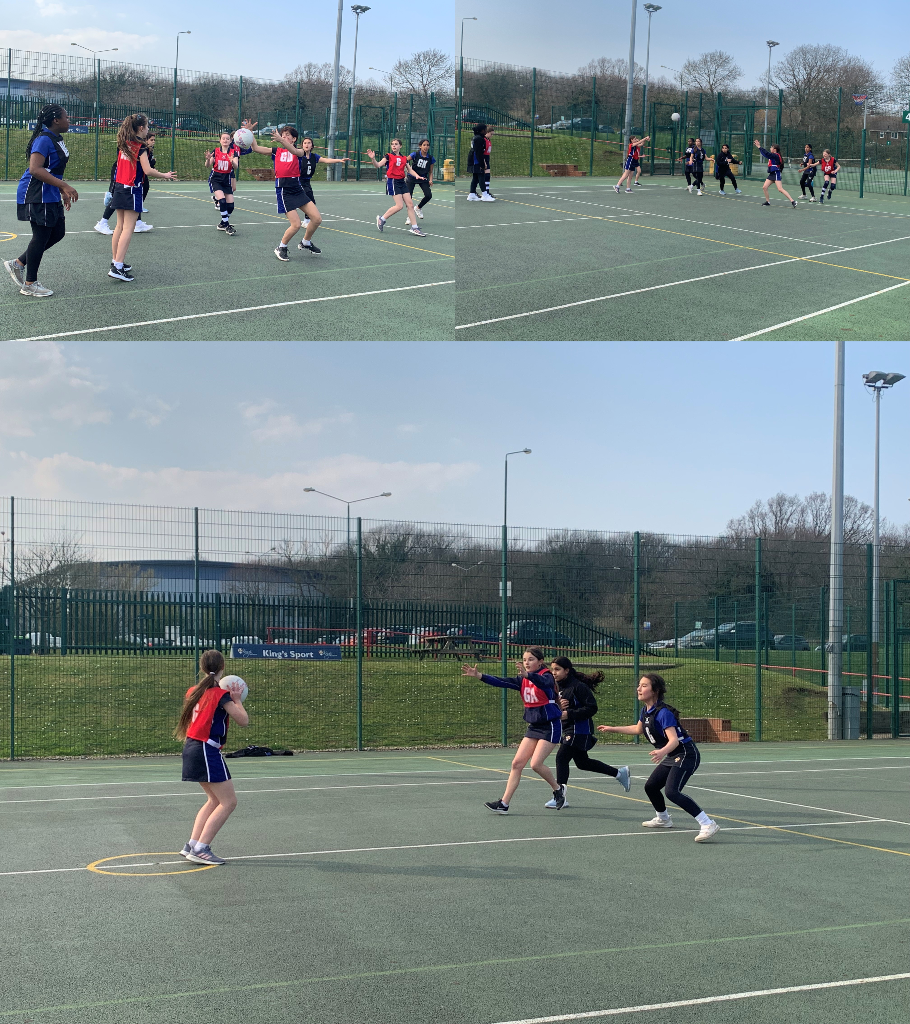 Claremont visited Bethany this afternoon in bright sunshine for the teams final fixture of the season and for many their final ever school netball fixture. It is this moment I reminded the girls to treasure and to mark with hard work but more importantly enjoyment.

From the first centre pass, it was clear that the heat was going to be an issue and the  players felt tired very quickly. With only 8 players it meant that players were unable to play at their usual high work rate. This was reflected in the teams overall performance when at times, players were not driving forward for the ball, forcing long loopy passes, which were easy pickings for Claremont’s defence.

Claremont put out a very strong performance and it took the Bethany defensive end a while to work out how to challenge Claremont's GA. Once some tactics were implemented I was delighted that GD Beth Kuhepa made some critical interceptions and turn overs. Our mid court and attacking end worked tirelessly trying to find the circle but today this was not enough to take home a win.

Girls I hope you have enjoyed your netball season and will continue to play next season wherever you may be. Good luck for the future and thank you for working so hard this year.

Our final game of the season in a very busy penultimate week of term for many of these squad members meant we had a straight 7. With little opportunity to sub or switch position this was a very even match, 4-4 after the first quarter and 7-6 in the second. Alicia Cripps was in great shooting form and Charlotte Ensor was relentless in her efforts as centre. Frances Lye worked hard bring the ball down the court in defence and in the second half, moved to Goal Shooter where she also shot well. This group of girls have been a pleasure to coach and I wish those who are moving on good luck. 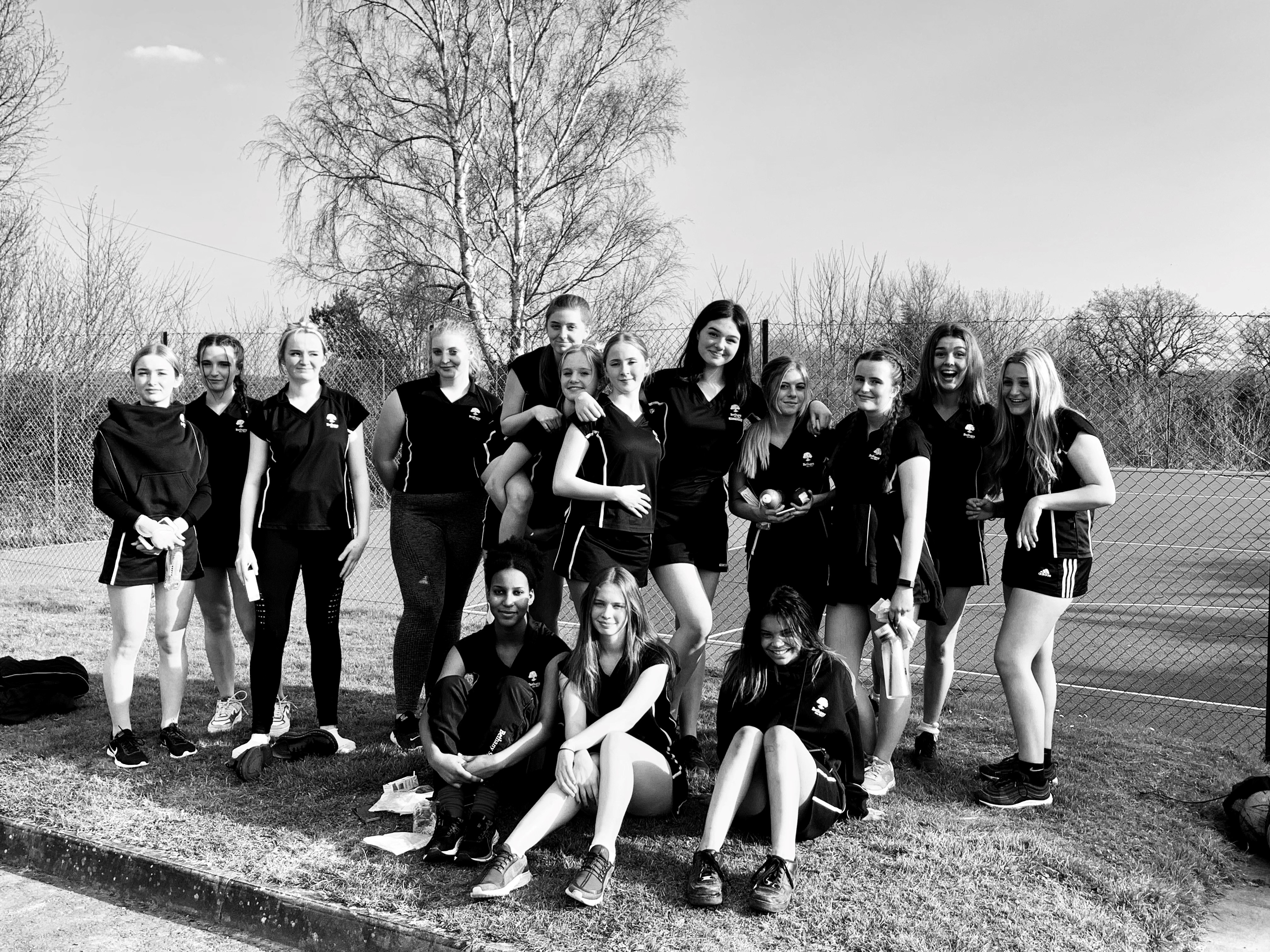 Bethany year 10’s hosted Battle Abbey on Tuesday afternoon for their last game of the season. Battle Abbey started strongly in the first half creating a couple of good opportunities and capitalizing on one, meaning they were 1-0 up early on. Both teams battled extremely well throughout the match, Bethany just edging the game without any reward in the form of goals. With less than a minute to go in the game Will Harley came up from the back to put in a delicious ‘rabona’ cross into the box that was excellently brought down and played through by Tom Sutton, to Ethan Taylor who slotted the ball excellently into the bottom corner, with the last kick of the game. 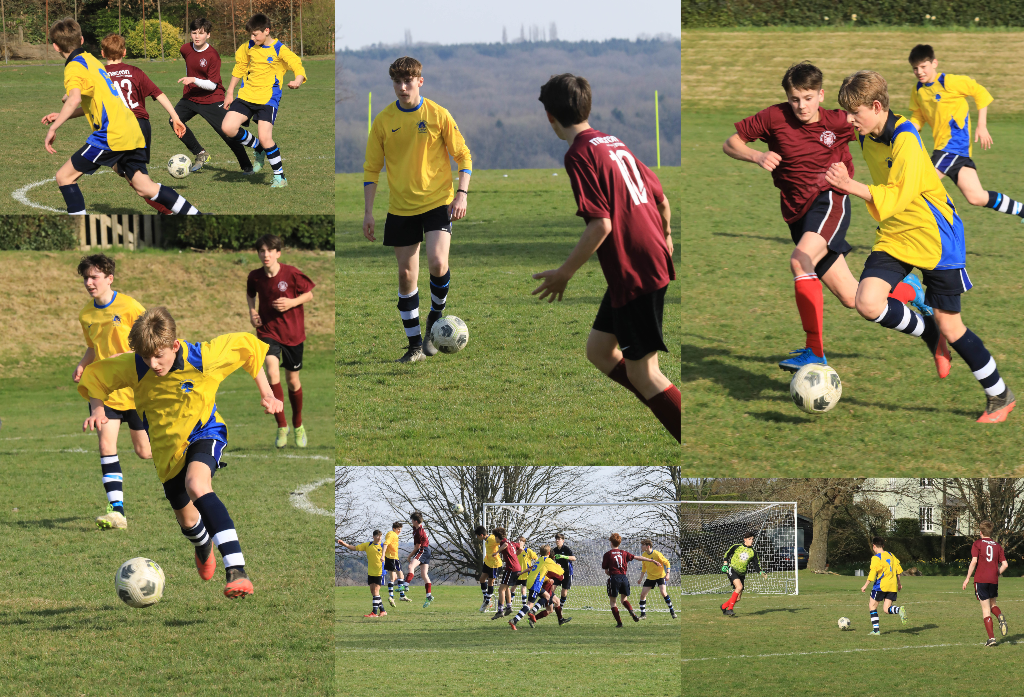 After a really strong performance in their last outing, the Bethany 1st XI were eager to finish the season on a high and, having lost narrowly to Sutton Valance earlier in the season, were determined to make amends this time round.

The game started slowly with neither team able to exert any dominance in the early exchanges. However, as time went on it was clear that Sutton Valance were going to prove to be our sternest test of the season as their size and strength helped them to take a grip on the game. By half time Bethany were two goals down but it was certainly not due to a lack of endeavour as our defence, in particular, made a Herculean effort to limit Sutton Valance’s opportunities in front of goal.

The second half saw Bethany come out ready to give as good as they were getting and they gave Sutton Valance some real scares at times whilst continuing to defend in the same dogged style. However, the game yielded no further goals but the Bethany players have to take massive credit for giving Sutton Valance (who remained unbeaten for the whole season) two very close, hard-fought matches.

It has been a fantastic season, with a few lows but many highs and the entire squad can be extremely proud of some outstanding individual and team performances.

Huge congratulations to Elsa, in Year 10, who made a fantastic first impression in her first Kent County Hockey games against Buck and Hampshire last weekend. Playing for the U15’s, Elsa scored 2 goals to contribute to the team success. Winning the first Buck game 3-0 before narrowly losing the second 2-1. Well done, Elsa!

We look forward to sharing more of Elsa's, and our other Bethany Kent County Hockey representatives, successes as we get them. 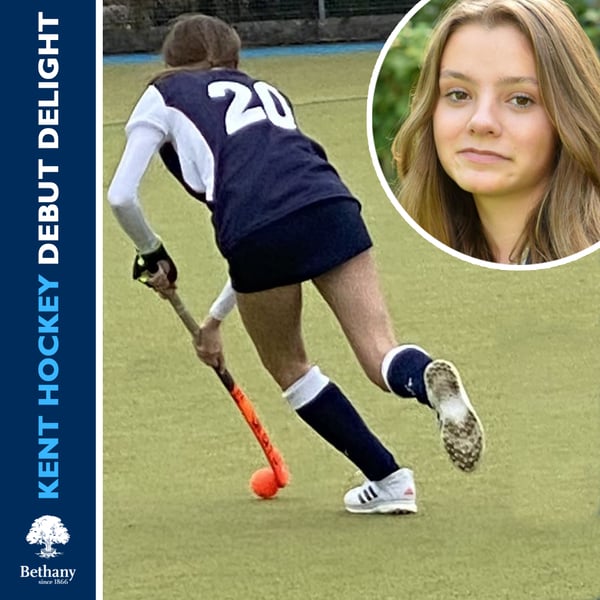