Another busy week for the Bethany School sports teams, specifically for our various netball and football teams, in some very close fought fixtures against some very tough competition.

U15 A Netball v Radnor House - Away

With only 7 players we had limited choices for positions. Within the first quarter it became apparent that Radnor had a well drilled and skilful team with very tall shooters making it very difficult for our defence to compete with.

I would like to say the girls never gave up, but for some that was not the case. With a 10 goal deficit they had decided the game was lost and the slippery conditions certainly didn’t help.

Final score: Bethany A 15 - 36 Radnor A
Player of the match: Emma Martin
Coaches player: Ella Smith (for being enthusiastic and really trying to enthuse her team mates)

U15 B Netball V Radnor House - Away

The girls arrived after a lengthy coach journey in wet conditions and simply struggled to compete against a very strong Radnor House from the first centre pass. Radnor covered 10 goals in the first quarter and Bethany could not find the goal. We had a change around and tried out different options but their shooting circle was particularly strong and they did not miss a shot. At half time the squad set themselves individual targets and we moved away from the idea of focusing on the score line. I was particularly pleased with how the squad persisted and battled to the end of the match and huge credit should go to the team for this. Today did not go Bethany’s way but there is always growth to be made in particularly tough conditions. Well done for not letting your heads go down and trying your best until the bitter end. 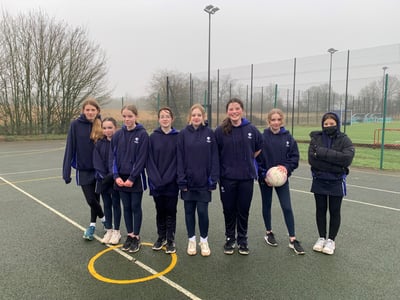 It was the girls first U15 match, and for some of the girls their first ever fixture for the school. The teams were evenly matched in ability however we struggled to move the ball down the court as we were all running into the same space. This made it too easy for Radnor house to get the interception and possession of the ball. Despite great efforts from Stella Flynn throughout the court we could not get our shooters close enough to the post to make an achievable shot on target. Lily Faulkner scored our only goal of the game which was our main focus and target for the 3rd quarter. The girls should be proud for ‘giving it a go’ and enjoying some successes during the game.

Bethany U15 B Football v Judd - Away

On Tuesday the under 15 Bs played Judd School Bs.

Despite the wet and slow conditions Bethany moved the ball well and the tidy passing paid off with an early goal from Theo Mitchell Clarke.

Bethany were solid at the back stopping Judd every time from scoring with a great debut display from Lawrie Pettit. Bethany then benefited from a set piece with Theo grabbing his second.

The second half was a muddy affair and this led to Judd pulling one back with an own goal by the goalie but, this didn’t matter as Bethany held on to win 2-1.

Bethany U15 A Football v Judd - Away

Bethany U15 A travelled to Judd yesterday. Judd started the better out of the two teams scoring 2 earlier goals. However just before half time, Sam Denny scored a brave header in front of the keeper to reduce the deficit. In the second half Bethany continued to battle hard until the end but couldn't add to their score. Judd however, we're able to add to theirs. The game finished 5-1 to Judd.

On Wednesday the under 13s B Team went against a virtually unbeaten Wye under 13`s team, the game started well for Bethany with the away team having most of the chances but, they were unable to convert them. Just before half time, Wye School scored 2 goals within a minute leaving Bethany with an uphill task to get back into the match. After an encouraging and confidence boosting team talk at half time, Bethany came out fighting. After a period of good pressure, Jago Veale scored his first of the season. It was all going Bethany's way as they continued to press with some fine passing and movement off the ball. Highlight of the half was Noah Mund carrying the ball forward with an excellent solo run, beating a number of defenders and then unleashing a spectacular finish into the top corner to make it 2-2. Bethany continued to create chances as the match drew to a close but could not convert them to seal victory. With the game in added time, the home team pounced on a mistake and scored to make it 3-2 and a win for Wye.

Bethany came off with their heads held high and proud with their performance against a skilled and unbeaten team.

Bethany Year 8’s travelled to Wye school on Tuesday afternoon. On a very physically demanding sloped pitch Bethany started strongly, dominating from the first whistle. Despite the early dominance kicking down the hill, Bethany squandered lots of opportunities to open the scoring. Towards the end of the first half Oscar Scott opened the scoring with a neat finish to the keeper’s right-hand side. Bethany knew the second half was going to prove challenging with the slope and as the game grew so did the Wye pressure on our defence. With around 15 minutes to go Wye equalised with a superb, unsavable shot into the top left-hand corner. Bethany then regained the lead through Ben Henry, however this was deemed offside by a very tight call from the Wye assistant referee. From this moment, Wye had the momentum and, with 3 minutes remaining, scored the winner with yet another unsavable shot to Henry Martin's left hand side.

After a tough match last week against Ashford, the squad had a lengthy team talk prior to the start of today's match against our guests Battle Abbey. We discussed why Ashford had proven such tough opposition and, more importantly, what had the players learnt about their own performance as a result. Every player was keen to set themselves a goal and we implemented some new team tactics in the shooting circle. Battle Abbey appeared to be a very good match for us in the first half of the game, the ball was end to end and at half time the score was 9-8 to Bethany. At half time we all agreed that the team performance was very good and everyone was adhering to their targets, but the girls wanted a solid win and more needed to be done. The players agreed that with tighter defence Battle Abbey’s centre passes could be broken down and this was their focus for the second half of the game. I was delighted that the first centre pass was broken down by Safi Chettiar, which set the tone for the second half of the match. Bethany stuck to a tight man to man defence and Battle could not shift them. The strength in the shooting circle of Olivia James, Mia Lawley and Ellie Turner was too much for Battle Abbey and today the victory was ours. 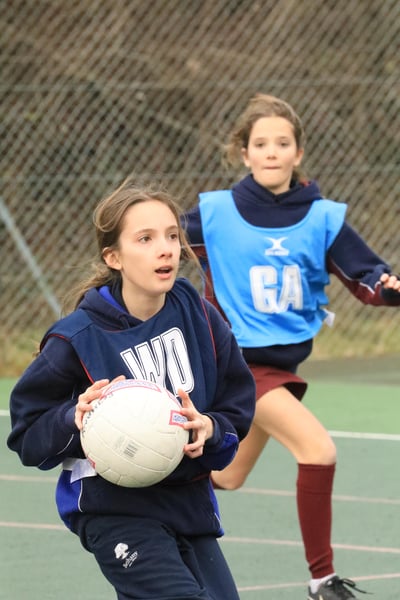 Having coached these girls for the last couple of months, I gave them each an objective to try and implement in the game. Without exception they all tried their hardest to achieve them. Battle were another unknown opponent so we started with the usual line up and immediately dominated court play. A few girls were asked to concentrate on Footwork and others positioning. Grace Holmes shot well from the inner half of the circle, passing when needed. Juliette Tapner was asked not to pass to the centre circle as Wing Attack and Goal Attack and to concentrate on making herself available to the attackers. Eriife Olatunji made sure of her distance before marking the ball.

I was delighted with their attitude and their improvement - a joy to umpire.

Final score Bethany U13 B 10 - 6 Battle Abbey (in what was a good match of abilities and lovely to see the girls work hard as a team. Next week our aim will be strength of pass and decision making.)
Player of the Match: Amelia Bickford
Coaches Player: Rose Pettit (who only did one footwork in the whole game and played her first ever Centre!)

Bethany 1st XI Travelled to MGS this week. Bethany struggled in the first half to cope with the physicality from MGS and consequently conceded two soft goals, meaning we went into half time 2 -0 down. After a tactical change at half time from Mr Vickerman, Bethany looked much sharper with Charlie Thorne asserting his presence into the midfield. As a result, Bethany got a goal back through a brilliant solo run from Ethan Hill, who slotted the ball nicely into the bottom corner. Moments later, with thanks to the MGS Centre back for laying down and handling the ball, Bethany were awarded a penalty, a chance to level the score. Ethan Hill stepped up but unfortunately couldn't capitalize on the opportunity. It was a battling second half which Bethany won 1-0 however this was not enough to overturn the final score.

Kings Rochester visited Bethany today. After an early injury leaving Bethany with a flat 7 on court, Bethany were up against a 14 player squad and their rotation of players meant a lot more hard work from Bethany. Bethany had moments of great flow down court from Ruby Russell, Ruqaiyah Jarviton and Delilah Hutchings, however Kings defence were strong and causing problems for our GS and GA. We struggled to convert multiple passages of play in the first half of the game and Kings responded by sending the ball to their very capable shooting circle. Amelia Midgley and Beth Kuheupa worked tirelessly in the defensive circle and managed to anticipate the play well and intercept the ball multiple times. However, the ball was broken down again in the 2nd phase and sent straight back into the Kings circle.  In the second half we made a few positional changes and this seemed to give Bethany more success converting 8 goals in the second half, not enough however to capture a lead from Kings. Well played girls, you worked hard and fought for a win until the end.

On a glorious bright sunny afternoon Bethany hosted King’s Rochester. Although it was lovely to have the warmer weather the glare made it very difficult at both ends of the court, firstly for King’s shooters who were shooting directly into the sun, and secondly for Bethany to move the ball down the court as they were driving into the sun and were blinded by it! In the 2nd quarter Bethany settled, starting to deliver the ball to our shooters closer to the post where they were more successful. The whole game was a close affair with end to end play, but fortunately with Frances Lye and Laura McGee making numerous interceptions, and Alicia Cripps managing to pop the goals in from distance, we pulled ahead. A great game and effort from the whole squad.